The idea to re-release these records, and for the first time in their original format, is very dear to me. I really like the word origin, because it’s very important to know where things and people come from. I hope that others can see that I have been an originator not an imitator, although I never considered myself futuristic or revolutionary at the time. The important thing with these reissues is the fun that they will bring to the fans that have demanded them for so long. I understood it was going to make people happy. I wanted to re-master my old tracks myself because I didn’t want to have a modern filter that would take away the charm of my old work, and new details would even appear in my work. In the end, the 1970s need to be heard: it’s important for the magic of listening. Listeners will have the exact sound of the studio that I was using at the time, hardly utilized by me for the original Revox tapes. It will be a journey to my dimension in a universe that I was the only one to know until now. I had the chance to work from magnetic analogue master tapes, which have not traveled far from my 1975 studio / chambre de bonne and the Paris suburbs where they were archived, since “the object ages less quickly than its creator.” – Black Devil

I also think that I naturally make pretty timeless music, and the proof is that my music continues to convince young people from all over the world, even in countries where I will probably never go. And these people could be my grandchildren! By the way, the title The Kid In Me, from my last album, represents my inner child, who thinks his music is timeless and unaffected by the clock.

The most exciting thing for me is that, for the first time, my music will be released and distributed all over the world, 40 years after being considered pitiful or mediocre, except for a few enlightened beings. And that means I can keep my job, which is very exciting. Music is my soul; it’s my life.

Cosmos 2043 and Suspense were made one after the other in 1975. Writing and production took two months for the first album and four months for the other. I chose to do everything myself, because I didn’t trust the other producers and musicians; I thought they were way behind the times. Besides, I’ve always found that other people around me paid little attention to music, and seemed old, unfashionable. Yet, it’s still amazing to celebrate the 40-year anniversary of Suspense (and 38-year anniversary of Cosmos 2043, which came out in 1977) because I never considered myself a pioneer or revolutionary.

To make these albums, I used a Solina keyboard, Hohner clavinet that France gave me, a monophonic Moog, a Poly Korg that had been lent to me, and of course, that Mini Korg 700 that I still use today. I also had a Teac 4-track tape recorder, Power effects (a defunct French brand) and an Allen &amp; Heath 12-track console. A real home studio ahead of the times in 1975!

Cosmos 2043 (released in 1977) is best known for “Earth Message,” which was sampled in “Got Glint” by The Chemical Brothers. The cover is a rather naïve drawing that I drew myself because I have little talent there. I like the idea of abstraction in my work: “Skeeze” and “Weekee Way” are words that have no inherent meaning, like music in general. But if you have a working brain (and you aren’t a robot), these words will indicate a direction, suggest an image, evoke a feeling, or make you laugh. Art can touch the mind, body, heart, and even the feet! For the title, I chose the date 2043 rather haphazardly – it had to indicate a distant time, far away. I imagine that in 2043 life will be harder and the weather much warmer, and truthfully I do not know… unless a fairy comes along…

For the third album, Disco Club (1978), I worked with a drummer who recalibrated the loops, which gives the tracks the special, very hypnotic grooves. In the end, I find this album to be very handcrafted. Even though the album was made in a recording studio in the Paris suburbs, we used equipment that would now be considered very “home studio.” My producer, Jacky Giordano, and I chose to give ourselves nicknames: he was “Joachim Sherylee” and I was “Junior Claristidge.” We wanted to pass as big shot American studio heads, which was a very highbrow business at the time, which spread the idea that good music could only be made by Anglo-Saxons. As for Black Devil, that was the final result of this change: an extension of me, a new character.

My influences come from classical music, rock n’ roll, rhythm and blues, and little songs on the radio – the kitschiest! I have always taken joy in respecting musical conventions, while also rejecting music theory at the same time. I’m also influenced by the work of my heroes: Louis de Funès, Maurice Chevalier, Edith Piaf, Woody Wood Pecker, The Addams Family, Garry Cooper, Grace of Monaco, Buster Keaton, Little Eva, Mickey Mouse… Images that disturb me are those of my dreams or nightmares; they are so much more imaginative than those images imposed on us as “fiction.”

My music is rather phantasmo-psychédélique, like soundtracks to imaginary films. Very few films were using this kind of music at the time. My music could soundtrack Barbarella or Interstellar instead of this very artificial synth noise you hear throughout the film. I also imagined my music in a Gary Cooper film, instead of the usual western music, or in Star Wars, in place of the redundant symphonic music, or even in Alphaville, Soylent Green, Alien, or Mars Attacks! I like movies that don’t inflict stereotypes, or ones that depict mundane everyday occurrences punctuated by music not unlike the sounds of Richard Wagner or neighborhood dance clubs.

In the second half on the 1970s, Paris was the “free thinker”, caught between a youthful past and a trendy, yet uncertain, future. The economy was healthy (a baguette cost 1 Franc or 0.15 €), nightclubs were friendly, girls were good girlfriends and guys were good boyfriends. I was buddies with most of the coatroom workers at the dance clubs that I would go to, and I never had to pay an entrance fee. I found a good way to get free drinks: I would sit at a table with older folks and challenge their “bad ideas” and “mediocre politics.” That always annoyed them, so they would buy me another drink to convince me of my mistakes! In reality, I always thought the future would be pretty idiotic, and I think it is like that today. I’ve been hearing the same phrases for 60 years, from the mouths of business school graduates and those with “no teeth”: technology has not made the world any happier, just more dependable and naïve. And the naïve man is the preferred food of the raptor.

However, the 2000s were a real godsend for me: I was able to show the public that I actually existed, and that my talent did not die over time. I continued to make music because, unless he’s shit, an artist must go to the end of his path. I wanted to prove that my work was not the work of producers, but my own good and beautiful work. All my life I survived music by compromising with crooked merchants. I hoped for better for 60 years, but I have to thank the artists who helped me.

Today, I feel more like Black Devil Disco Club instead of Bernard Fèvre, because Fèvre was born in 1946, and Black Devil in 1978. I am a young 37 year old! 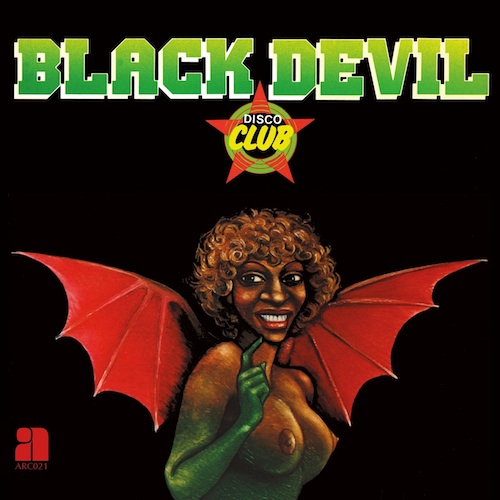